The Ulster Canal Greenway is proud to once again host this great event, aimed at raising awareness of – and funds for – those affected by suicide.

Starting in darkness at 4.15am on Saturday 7th May,  and crossing the line just as dawn is breaking, the phenomenon that is Darkness Into Light, Pieta House’s annual 5km walk/run, is now in its eighth year, with over 100 venues across Ireland and beyond lined up.

You can register online using this link http://dil.pieta.ie/…/venue-vi…/darkness-into-light-monaghan

Or you can come along to pre-register at the following locations around Monaghan in the lead-up to the big day:

Everyone is welcome its a great cause so why not get involved .

The Irish Heart Foundation, in conjunction with Monaghan Sports Partnership and HSE Health Promotion, will run a Community Walking Leader Training Course, April 23rd-24th in Monaghan Town (out of the Four Seasons Hotel and using the Greenway).

The training is primarily aimed at those wishing to lead a local walking group or promote walking in their community or workplace. The course comprises of a weekend of training and a follow up 4 week leader task to try out your new walking leader skills. Irish Heart Foundation, HSE Health Promotion and the Irish Sports Council are subsidising the course and there is a nominal fee of €50 which will cover your training, materials and two lunches.

The course will run on Saturday April 23rd (9am-5pm) and Sunday April 24th (9am-2.00pm). During the weekend you will gain a greater understanding of the health benefits of walking, learn to develop and lead a local walking session for mixed fitness levels, receive advice on starting a new walking group or promoting an existing group and gain a greater understanding of posture, technique, stretching and safety issues for a successful walk. For more information on the course or to register please contact Tara Curran, tcurran@irishheart.ie or download an application form from www.irishheart.ie/sli or contact Monaghan Sports Partnership for a further discount of €10 to any participant from Monaghan who books and pays for their course before Wednesday 20th April. 042-9755126

Anyone passing the Coolshannagh roundabout recently can’t help but to have noticed construction works on the triangle of ground opposite Grahams’, enclosed by the Armagh road, the Bypass and the Ulster Canal Greenway.  Formerly used by Monaghan Co Co as a place to deposit spoil from roads projects, this little patch of ground is undergoing a spectacular rebirth, thanks to a PEACE-funded cross border arts project linked to the Ulster Canal.

The project is led by Blackwater Regional Partnership, of which Monaghan County Council is a member. The BRP has been working behind the scenes for many years on promoting the concept of re-opening the Ulster Canal.  Last year, they received funding from the Northern Ireland Arts Council to commission three pieces of public art to be installed in communities along the former waterway. The largest of the three artworks is the Monaghan piece, with smaller installations to be placed at Middletown and Caledon to mark the significance of the canal to those two communities.

The original route of the disused Ulster Canal is 78km long and lies almost exactly half in half on both sides of the border. The Canal once served to facilitate the movement of people and goods across the region; a region which was fractured geographically by the introduction of the border, and culturally by the Troubles.  Now, with the advent of more peaceful times, the Canal is enjoying a rebirth, and again is facilitating the movement of people, this time along its banks which are being developed as a Greenway.

The artwork was developed by artists Mark Ryan and Maree Hensey, and represents the role of the canal in the region’s history, and in its future.  Two curved arms of stainless steel curl upwards, coming together at the top. The shape is reminiscent of a crashing wave, and the surface of the steel has been roughened so that when the sunlight hits it, it splits into many dancing facets, similar to the effect of sunlight dancing on water.  A bronze sphere rests on the arms, giving a sense of movement.  Symbols on the sphere include leaves to represent the rich biodiversity along the canal, waved lines to represent its watery heritage, and 26 circles to represent the 26 locks along the canal. The artwork is about connectivity, renewal, making a different future, finding purpose and a peaceful way forward. 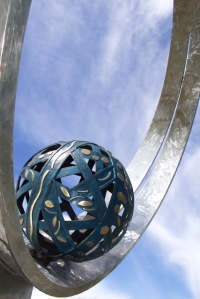 The artists were assisted in developing the symbols to be used on the sphere by three local groups, who participated in a series of art workshops earlier this year.  Monaghan County Council would like to thank the National Adult Learning Network, the Neighbourhood Youth Project and Teach na nDaoine’s homework club for their part in bringing the artwork to life.  A record of their work was placed in a time capsule and inserted into the base of the sculpture.

Today marked an important date in the project, with the sculpture arriving on site and being installed on its concrete plinth.  Council gardener, Dennis Flannery will now get to work on landscaping the surrounding ground and bringing his own interpretation to bear on the story of the Ulster Canal.

We’ve cracked it!  We just collected the user data on the Greenway for the first quarter of this year, and are excited to announce that we have passed the 100,000 user mark!  102.056, to be exact!

We had our first professional photoshoot along the Greenway last week – considering it was bitterly cold and we had to keep dodging deluges of rain of near-biblical proportions, we think they turned out rather well!

Thank you to Barry Doherty and family, Oliva Johnston Murphy and family,  Jill Condell and family,  and Mia the dalmatian (who wasn’t happy she didn’t get an easter egg for her trouble like everyone else!)

Monaghan Rotary club are organising a 10.5km walk, run or cycle using the Ulster Canal Greenway to link up four fitness centres in the town.

The event takes place on Sunday 12th April. For more information, and to book your start time, contact one of the following: