The Ulster Canal has a colourful but not very successful history

The Ulster Canal was built between 1825 and 1842 and was 74 km (46 miles) long with 26 locks. It ran from Charlemont on the River Blackwater to Wattle Bridge on the River Finn, south-east of Upper Lough Erne. 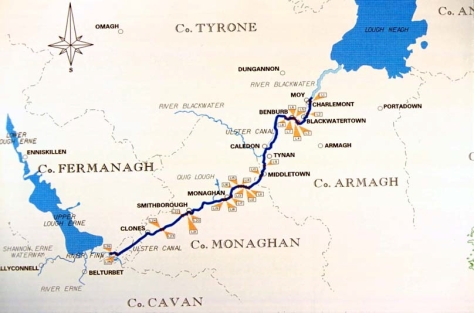 Due to a number of issues, the Canal was unprofitable. These included:

Originally, the canal was developed by a private company. At various points, it was taken over by the British government and refurbished, until it was finally acquired by Lagan Navigation Co. The losses from the Ulster Canal beggared its new owners, who were saddled with the huge costs of maintaining the canal. Eventually, Lagan Navigation applied for a ‘warrant of abandonment’ to Westminster in 1931 and this was granted. This only applied to the sections in the newly formed Northern Ireland (the partition of the Republic happened in 1921); a similar request to the newly formed Irish government for a warrant of abandonment for the section through Co Monaghan was refused.

In the 1940s Monaghan County Council was granted a Judgement Mortgage on the canal in lieu of unpaid rates. Lagan Navigation offered to give the canal to the Council in lieu of monies owed, but the Council declined, having been advised that the upkeep of bridges etc. would be beyond their ability to finance. Lagan Navigation Co was dissolved under the Inland Navigation Act (NI) 1954. This left the stretch through Monaghan as ‘ownerless goods’ (bona vacantia) and as such fell to the Minister for Finance. Ownership passed to the Office of Public Works under the State Property Act 1954. In the early 1970s, Monaghan County Council, Monaghan Urban District Council and Clones Urban District Council each acquired some sections of the canal under the Derelict Sites Act 1961. Stretches which were not derelict at that time (i.e., which were being occupied) could not be acquired and ownership remains with the OPW.

The last boat travelled the canal in 1929.

You can read the whole saga on Wikipedia, by following this link.